The tale behind the Crossett Light is similar to many railroad light legends, involving the decapitation of a rail worker in a tragic accident.

Many observers described many different characteristics of the Crossett Light over the years. Predominant of Old Light descriptions is that it occurs as an orange ball of fire or that it resembles "a kerosene lantern glowing in a window in the distance." However, other descriptions differ, with one man who lived near the tracks describing the light as having a "pure white center with an outer edge of royal blue" and another saying the light pulsated from white to amber to gold with occasional bursts of bright red. All pretty much agreed that the light on the tracks changed in color and brilliance. They also agreed that misty moonless nights were best for viewing and that the light was not a nightly occurrence. Sometimes months would pass without a sighting. People would wonder if the phenomenon had ceased. Then, the light would show itself once more.

The Crossett Light was well known to appear in the ditch beside the tracks and drift or dance across the tracks to the other ditch before winking out. Other times it would pause over the rails to bob around and oscillate in color and brightness for up to ten minutes at a time. If the viewer remained where he was, the light would usually appear again, closer to his position with each appearance until it eventually crossed behind him. However, if the viewer tried to approach the light, it would disappear and the show was usually through for the night. At times the light grew bright enough to illuminate the railroad right-of-way and the surrounding woods. On other occasions the light was known to travel straight down the tracks above the rails, appear in adjacent woods and fields, or even chase viewers. However, there is no record of the light ever harming anyone in its 60+ years residence on the Missouri-Pacific tracks.

Many amateur investigators sought to explain the Crossett Light over the years. All came up short typically blaming the usual suspects: miraculously mobile luminous fungi, gas from nonexistent swamps, and in particular headlights from Highway 52 six miles to the north of Unity Road. Those skeptics who embraced the especially onerous headlight theory refused to take into account that when the Crossett Light first appeared cars were less common than ghost lights in Southern Arkansas. Even after cars became commonplace, the light refused to correlate its activities with traffic and sometimes remained absent for months while cars crossed the tracks regularly. 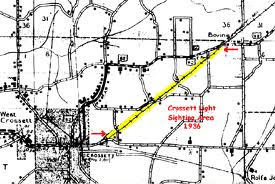 Probably the first attempt at what could pass for a scholarly investigation of the Crossett phenomenon was conducted in ad hoc fashion by graduate students at Yale University’s School of Forestry. Crossett was on the forefront of forestry research and the Crossett Company planted the first southern pine plantation in an effort to keep a steady future supply of timber for its mills. As plantations grew in popularity, Crossett was the natural place for Yale students to do research and refine this new branch of agriculture. Yale established a summer camp for grad students less than a mile from the Unity Road crossing. Starting in the late 1940's and continuing until the camp closed in the 1960's, the tradition grew among the students and teachers of trying to fid the source of the Crossett Light. The yearly classes repeatedly tried to correlate the light with traffic using observers at multiple points armed with radios, but failed with each attempt.

In 1962, Duke University's cutting-edge parapsychology lab grew intrigued by the stories coming out of the Arkansas woods. However, a local writer who desired that the source of the light remain a mystery dissuaded their investigation plans.

That writer's opinion was not uncommon around the area. Most locals didn't want their light explained away. The Crossett Light was the otherwise peaceful mill town's only claim to fame until Barry Switzer coached the Oklahoma Sooners to the NCAA football championship. The fact that most source materials capitalize the name of "The Light" as a personal pronoun only served to further illustrate Crossett's affection for its own personal mystery.

To view the old Crossett Light, prospective observers had four choices. The first and most common was to park at the Unity Road crossing that existed near the present Wal-Mart Supercenter and walk far enough down the tracks to avoid light contamination from the cars crossing the tracks behind them. Second, viewers could park at the crossing on Ray Lochala Road. Third, and sometimes most productive was the Malloy Road crossing. Fourth, light hunters could try the Highway 52 crossing near the Crossett airport and walk north along the tracks. Regular observers often said that the airport site was the least productive because of the distance from the area where the light most often occurred.

In the early 1980's, Missouri-Pacific and the Ashley, Drew and Northern railway announced its intention to remove the tracks that the Crossett Light frequented. This news caused an instant uproar around the community. One of the first organized efforts to preserve a ghost light sighting area sprang up overnight as locals expressed the opinion that though the tracks might belong to Mo-Pac, the light belonged to the people. In the end the preservation effort proved futile. The railroad pulled up the tracks and threw up earthen berms to prevent travel along the old rail bed.

For several years after the demolition of the tracks, many people believed that Missouri-Pacific had finally extinguished the Crossett Light. The Light itself would have the final say in the matter.

Next: The New Light

Comments are welcome, but any comments containing profanity, defamatory or offensive tone, trolling, viagra offers, etc. will be deleted.

Have you seen the Crossett Light?